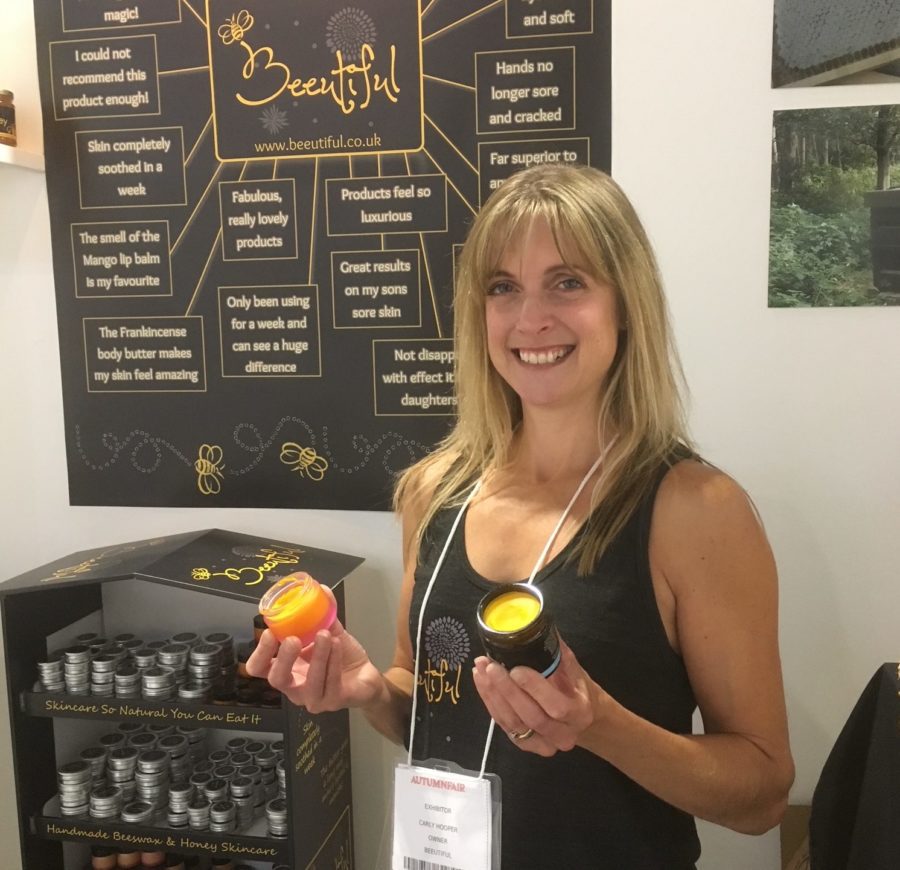 Carly Hooper tells us how she set up her own business in order to better support her son, why it’s important not to write off people with disabilities, and why she’s her own greatest inspiration.

How do you identify as disabled, and what does it mean to you?

My son, Callum, was diagnosed with hemiplegia at 11 months, after suffering a stroke in the womb. As a disabled child, he has a lot more challenges to face, he needs a lot more help and understanding, and he has an uncertain future – a future I am a little fearful of.

Why did you start your business? Can you share your story so far?

I am a beekeeper, and my business, Beeutiful, is hand-making and selling 100% natural skincare using beeswax and honey. Before I had children, I worked at a university as a forensic psychologist. When we discovered Callum was special, I gave up that job and instead marked MSc essays for another university, so that I could work from home and fit my work around his needs. By the time Callum was at school and my youngest was at pre-school, I felt I wanted more and wondered if there was more I could do with the bees which I had started keeping as a hobby but would allow me to be at home and be flexible with my time.

It began back in 2011, I read an article in a Sunday supplement about a couple keeping bees on their rooftop in London. I was fascinated, and started to learn more about beekeeping. Eventually I discovered Fleet & District Beekeeping Association, and joined their beginner course, which started in spring 2012. At the end of the course, in May, the weather was bright and warm enough to enter the hives: it was something I had never done before, so I didn’t know how I would react, but despite not being a fan of insects I loved it.

I obtained my first small colony of bees from a fellow Fleet Beekeeper that summer. Summer 2012 was shockingly wet, one of the worst on record, which is not good for bees, and in December I discovered my bees were dead! More experienced beekeepers explained that, due to the wet summer, the new Queen in my colony had probably not been very successful on her mating flight and had not mated enough to sustain the 2000 eggs a day she lays in the summer to allow the colony to thrive and survive the winter. I was devastated but had learned an important lesson. The following spring I took in a swarm, then another and another, and my beekeeping career really took off.

During my research into beekeeping, I also learned a lot about the benefits of beeswax and honey. One fact that really grabbed my attention was that honey was used in the First World War on wounds: the antiseptic and antibacterial properties of honey help fight bacteria, while its humectant quality makes it a great medium for skin healing. This set me off on my journey of producing skincare that benefits the skin and has therapeutic as well as cosmetic qualities.

I decided to try making some items for us at home. I liked what I had produced, so I made more and shared with friends, who liked them and suggested I could do more with this. With my husband’s support I started playing around with more stuff and creating more concoctions. I have never done a course: I make all my products from trial and error, researching what I want the product to do and therefore what ingredients would suit that goal.

I founded the skincare business in November 2013 because I wanted to continue working from home so that I could be there for my children, especially Callum, and wanted the flexibility to be able to attend hospital, consultant and school appointments.

From my initial launch with ten products, I now have almost twenty, and have also introduced a more luxurious range called B-Rose, which harnesses the soothing and refreshing qualities of roses. Currently boasting fifteen skincare awards and a small business award from Theo Paphitis, and with more products planned and new stockists coming on board, I am delighted to say Beeutiful is going from strength to strength.

What do you see as the main challenges facing your business and its continued operation or growth?

The biggest challenge is definitely time. Although this isn’t any different to any other mum who has her own business, Callum does have extra needs. He’s 15 this month, but in many ways his behaviour is that of a toddler. While most parents of 15 year olds can let them make their own way home from school and leave them to do most things independently, Callum is still cared for intensely and this will be the case all his life. He will always need someone to assist him.

We are also currently facing some very practical difficulties. I started out keeping my bees on some MoD land in front of my house as well as on a farm in a nearby village, and we converted part of our garage into a workshop to make the skincare products. About three years ago, the farmer who owns the farm where I kept my bees told me that around 14 acres of land adjacent to his was up for sale.

My husband and I had often spoken about selling our house, owning a small holding and living off the land, but there’s no way we could afford to do that staying in our current location and we didn’t want to move. We had also discussed building Beeutiful to a point where it could provide Callum with a silent role and a regular income, so that he could be financially secure and there would be less pressure on our youngest son to feel responsible for his brother.

This opportunity was too good to miss. After much thought and research, we bought the land in order to create a bee farm. We planned to run beekeeper experience days, sell more honey, build a bigger workshop for Beeutiful, and grow crops such as goji berries to sell to shops and restaurants, possibly creating some sort of employment for Callum as well. We knew we wouldn’t be able to build on the land, as it was classified as agricultural, but we hoped that we would be allowed to put a log cabin there that we could live in. We also saw this as giving us scope to build another cabin in the future for Callum, so that he would have some independence but could still be supervised either by us or by visiting carers, rather than moving him into a residential care home.

Unfortunately our application was turned down point blank. 120 hives is not deemed sufficient reason for us to need to live on the land, as you don’t care for bees at night.

Now the wheels are back in motion. We have had to alter our plan a little to include other livestock, such as chickens, and this time we are presenting the plan to the council in stages, with the need to move on site being the final stage. Callum is about to turn 15 and while right now he has no idea of employment, and little independence or understanding, I desperately hope that I can provide a safe and secure environment for him that not only provides an income for him, but also gives him the opportunity to learn new skills and somewhere to live so that he doesn’t need to move into a residential home.

When Callum was first diagnosed, I was told he would probably never be able to walk or talk. I replied, “You’ve not met me!” After endless physio sessions, endless speech and language sessions, and talking to him constantly, he not only walks but runs, and you can’t shut him up for talking! I’m glad I devoted so much time to helping him reach his full potential then and this is the same: I did the very best I could when he was 11 months old, so why wouldn’t I do the very best for him now? I have the determination, skill and downright stubbonness to create something that will enable him to provide for himself for the rest of his life so that’s what I’m going to do.

What is holding them back and what can we all do to help change that?

My son wouldn’t be able to run his own business, he can just write his name, but I can see how others less needy than him could be encouraged if the right support is there and forthcoming. Some things which I think might be useful for people with disabilities who want to have their own business would be support, and mentors who can advise, demonstrate and lead by example.

What do you consider your greatest achievement or the proudest moment in your life so far?

I was aghast that Callum was immediately written off when we received his diagnosis. I worked incredibly hard to get Callum to the point he’s at now, with daily physio and daily sensory activities. I raised £4000 to take him to a charity that provide programmes for children with a brain injury to help them achieve. I am delighted that Callum does indeed walk and talk – perhaps not perfectly, but he can do both.

If there was one thing you could change about peoples’ perception of disability what would it be and why?

Who or what inspires you?

Myself! Gosh that sounds obnoxious but I am not here to be average, I’m here to make a difference, to stand out and to achieve as much as possible and I want that for my children too. 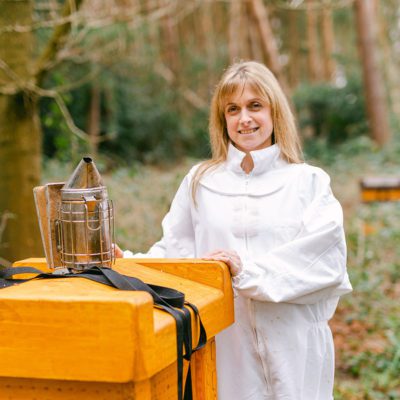 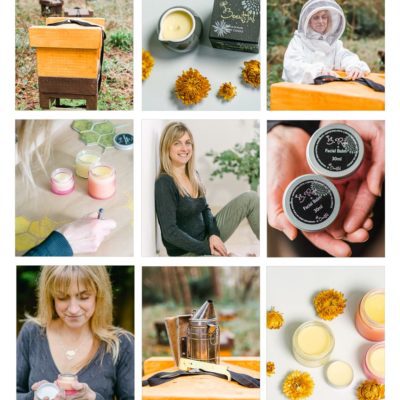 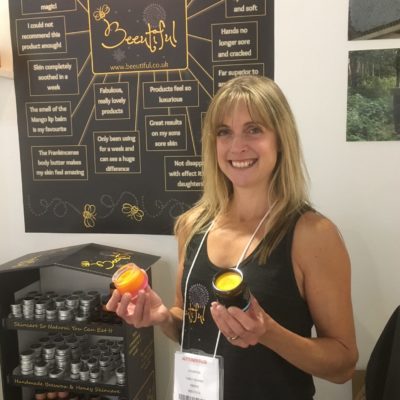 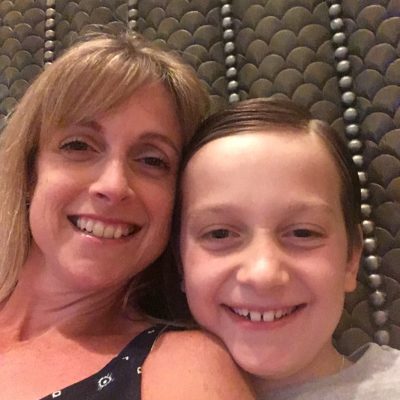 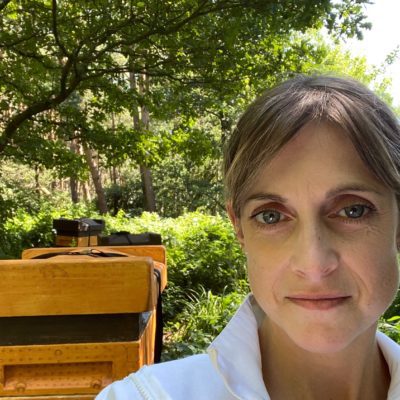 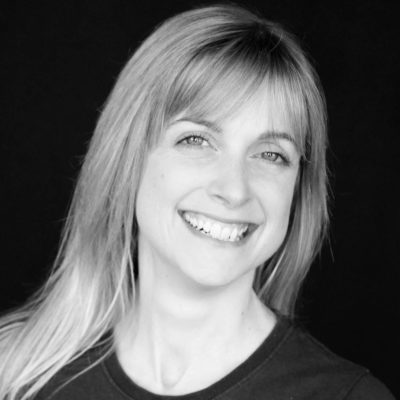