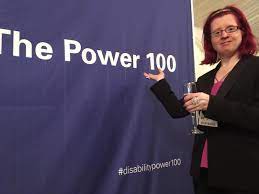 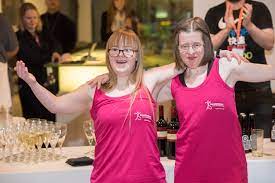 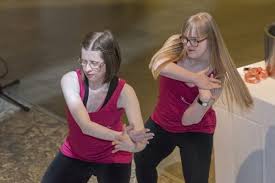 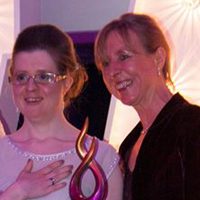 Jen Blackwell knew from a young age that her future lay in dance, and when she was unable to find a dance training program that was accessible and appropriate to her needs, rather than giving up on her dream, she created her own. DanceSyndrome was founded in 2009 and has gone from strength to strength ever since.

Dance Syndrome’s vision is simple: to empower learning-disabled individuals through inclusive dance. It is unique in being led by dancers with learning disabilities, who work inclusively with professionally trained dance artists, and strives to continue to provide new and exciting opportunities for people who may otherwise be excluded from mainstream dance. They have an equal number of learning-disabled and non-disabled company members, and they provide inclusive dance and leadership opportunities for people who believe disability need not be a barrier to living life to the full.

Jen Blackwell, who is the founder and Creative Director of the charity, and who has Down’s Syndrome, is the perfect example of this. Despite being written off at birth, she now lives the most extraordinary, ‘normal’ life, which has included attending the Queen’s Garden Party at Buckingham Palace for services to the community, an invitation to the House of Lords to talk about her incredible achievements, and meeting her heroine, singer Alexandra Burke, at the world-famous Pineapple Dance Studios in London to perform her own specially choreographed dance to the singer’s hit record, Hallelujah!.

Jen began dancing in pre-school and then joined a dance class, where she studied dance including Latin, ballroom and jazz. It was while doing work experience while at mainstream school, however, that led her to discover the power of communicating through music and dance. Jen decided then that she wanted to become a community dance worker, saying: “Dance is my life and my passion. My future lies in dance”.

After leaving school, however, Jen found herself in the frustrating position of not being able to fulfil her ambition, because there was no suitable dance training for a person with a learning disability. After ten years of unsuccessfully searching for training that was appropriate and inclusive, it became clear that many others were in the same situation: something needed to change, and Jen and her parents took matters into their own hands. DanceSyndrome was formed in 2009.

The charity quickly developed a momentum and life of its own. In 2011, they participated in 15 community performances including Oldham Carnival and Didsbury Festival, and in 2012 they established their first regular weekly workshop, funded by Awards for All, and were selected to perform in the Manchester Parade. In 2013, they performed on television with Miranda Hart and Pasha from Strictly Come Dancing. Numerous opportunities have followed ever since.

As DanceSyndrome has grown, Jen has been the recipient numerous awards. In 2015, she was declared Inspirational Woman of the Year at the Enterprise Vision Awards, which was judged on a level playing field, with no allowance made for disability – an enormous accolade which earned her a standing ovation from the entire room. She also received a Points of Light award from the Prime Minister in 2018, and was Highly Commended by She Inspires. She was included in the Shaw Trust Disability Power 100, an annual publication containing the 100 most influential disabled people in the UK in 2017, 2018, and 2019, and has also featured on The Disability Power 100 list, The Shaw Trust Leaders List, and the Lucozade Movers List.

DanceSyndrome itself has also won multiple awards, including The People’s Choice Award at the National Learning Disability and Autism Awards 2019, the Queens Award for Voluntary Service 2019 and the  Not-For-Profit Award at the Red Rose Awards 2017. The charity has secured substantial funding, including numerous Arts Council awards, a three year Spirit of 2012 award and a three year Reaching Communities award, and many significant trustees and patrons, including Baroness Sheila Hollins, Sally Phillips, Alexandra Burke, Rula Lenska, and Andrew Self from BBC’s The Greatest Dancer.

Today, Jen’s continued drive and passion creates opportunities for other dancers with learning disabilities to aspire and thrive in ways never before countenanced. Jen is frequently asked to perform at events, such as ADASS 2018, and she was also recently invited to be Innovation and Entrepreneurial Lead for Team High Sheriff Greater Manchester, which involved leading audiences of 400 young people. As well as dance workshops, DanceSyndrome also offers public speaking for conferences and special events, and performs in front of audiences of all sizes.

In Jen’s words, “I owe my life to my dancers. They give me my life in dance, and I give them opportunities to live their lives in dance”. She adds, “But the most important thing we offer is friendships, and the chance to go out in the world no matter what your disability”.